Johann Heinrich Griesedieck brews his first batches of beer in the town of Oelde-Stromberg, Westphalia.  Westphalia would become part of the Prussian Empire, which later became Germany. 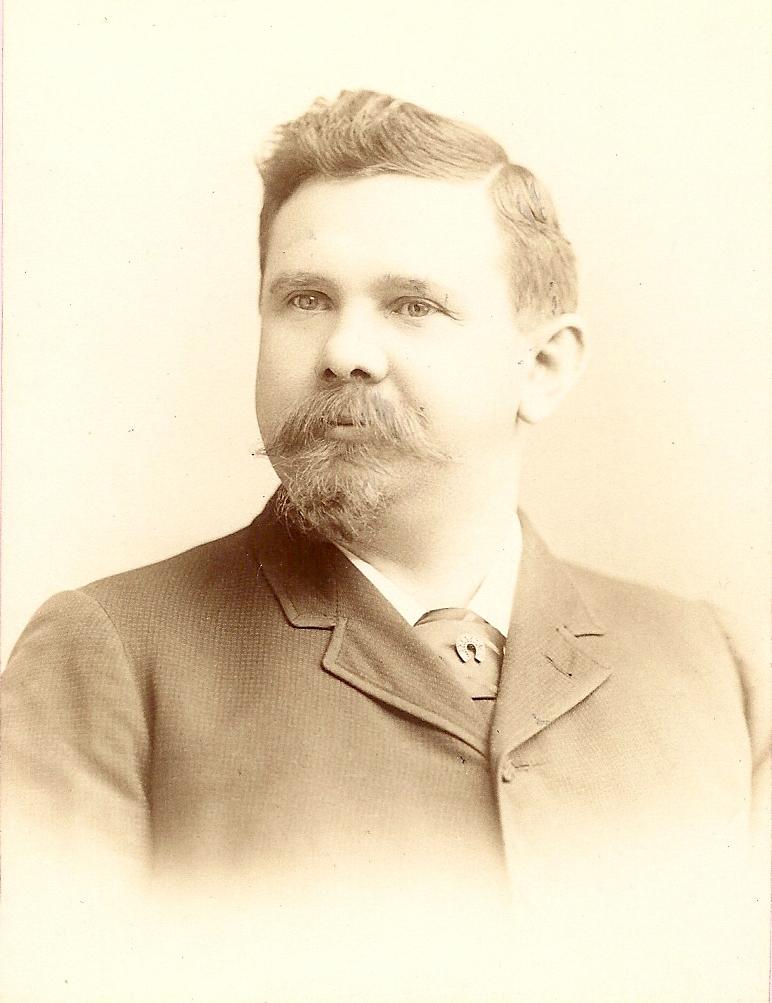 Johann's great-grandsons Anton, Franz, and Heinrich traveled to St. Louis in pursuit of the American Dream.  Anton and Heinrich used their brewery knowledge to open a malt house in south St. Louis City for eight years.  They eventually operated multiple breweries, including the A. Griesedieck & Co. Brewery, the Phoenix Brewery, and the National Brewery.
Franz’s son, Henry L., eventually opened the Griesedieck Western Brewery in Belleville.
One of Anton’s sons, Joseph, was in the first graduating class at the U.S. Brewing Academy in New York in 1870.  He, and his brother, Henry, involved themselves in the tradition of their forefathers, and besides working at their father’s brewery, came to manage the Independent Breweries Company in 1906.

The Original Griesedieck Brothers was created as a response to the increasing popularity of conglomerates in the early 1900s.  The latest wave on consolidation had occurred with the Independent Breweries Company (IBC), with Henry Griesedieck Jr. as company president from 1907 to 1911.  Having a natural distaste for big breweries, and wanting his sons to have a brewery, Henry Griesedieck Jr. split from the IBC in December 1911.  He created Griesedieck Brothers brewery for his five sons – Anton, Henry, Raymond, Robert, and Edward – and named his son Anton as company president. 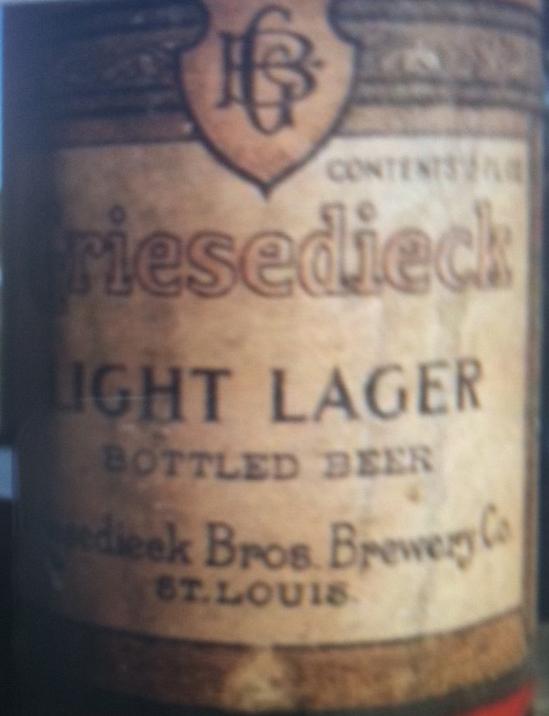 While local competitors Anheuser-Busch and Falstaff jumpstarted production to enter the market right as Prohibition ended, the Griesedieck Brothers updated their brewery and re-entered the market in July 1933.  The three remaining brothers led their revived company through consistent growth.
By 1936, sales had doubled pre-Prohibition levels, and were 75% higher than those in 1935.  Sales in St. Louis were booming so much that the Griesedieck Brothers had to terminate several distributor contracts just to keep up with current demand.
Griesedieck Brothers brewery was also a pioneer in marketing.  In 1935, Griesedieck Brothers brewery was an industry leader in advertising to women, knowing that even back then women tended to be the primary shopper at grocery stores.  Griesedieck Brothers also used cartoons in advertising, implementing Ripley’s “Believe It or Not”, and by providing informational facts about beer, the brewing process, and a focus on quality.
President Anton Griesedieck would not live to see the results of these advertising campaigns, as he passed away on December 4, 1935, at the age of 55.
Brother Robert Griesedieck took over as president, and implemented the new “handy” or squat bottle for Griesedieck Brothers Light Lager.  GB was one of a few breweries who sold these as returnable bottles.

The brewery had expanded to 400,000 barrels per year, and by then Griesedieck Brothers was the first in St. Louis to utilize the Crowntainer can.  The brewery also started to use the phrase “Double Mellow” on its packaging.  The Griesediecks hired young brewmaster Edward Vogel, Jr.   Youngest brother, Edward Griesedieck, ended up taking over after his brother, Robert, died in 1942.

The 1940s was a decade of continued expansion for the Griesedieck Brothers brewery.  The brewery captured the radio sponsorship rights for St. Louis Cardinals baseball games and St. Louis University basketball.  The Griesediecks gave young Harry Caray his start as an announcer, and he would encourage listeners to drink GB during games – broadcasted over a 90+ station, 10 state Griesedieck Brothers – Cardinal Baseball Network.

By 1950, the brewery produced nearly one million barrels of beer, and one could find GB beer in 12 states in the Midwest.  Griesedieck Brothers also stepped up on advertising to black consumers, seeing increased sales in markets such as East St. Louis, Illinois, and Memphis Tennessee.

Griesedieck Brothers saw its high point in the early 1950s, with booming sales and 20 hour production days.  The Griesedieck plant was one of the most modern and efficient breweries in the country.

For the past decade, Griesedieck Brothers had focused its advertising efforts through the St. Louis Cardinals radio network.  When the team was put up for sale in 1952 by Fred Saigh, the Griesediecks had the first right of refusal.  St. Louis Browns owner, Bill Veeck, had wanted to run the Cardinals out of town, making the purchase of a baseball team without a stadium unpractical.

February 23 - Cross-town Anheuser-Busch purchased the team, saving the team from moving out-of-town.  Later this same year, Bill Veeck of th eSt. Louis Browns sold Sportsman's Park to Anheuser-Busch for $800,000.  This was the initial chess move that allowed Anheuser-Busch to increase its local marketshare.  During the next two years, Anheuser-Busch required Griesedieck Brothers to relinquish all television and radio advertising for the Cardinals - and ultimately its sponsorship - to Anheuser-Busch, thus eliminating the Griesediecks’ primary form of advertising.

Jan 4 - Cross-town rival Anheuser-Busch lowered its St. Louis pricing on Budweiser and Michelob.  They did so again Jun 21, 1954 to meet pricing - which had not be raised - with Falstaff, Griesedieck Western, and Griesedieck Brothers.

October - the price war had changed the St. Louis market.    Local sales of Budweiser rose 201.5%, Falstaff dropped slightly, Griesedieck Western fell 33%, GB fell 41%.    At this point, the ownership of Griesedieck Western sold to Carling, which would gradually encourage drinkers to switch their beverage of choice from Stag to Black Label.

Having also lost their primary form of advertising, the Griesedieck Brothers Brewery changed direction and opened a hospitality house designed like a 17th century tavern – called Stein Hall – to maintain good relations with the local community. 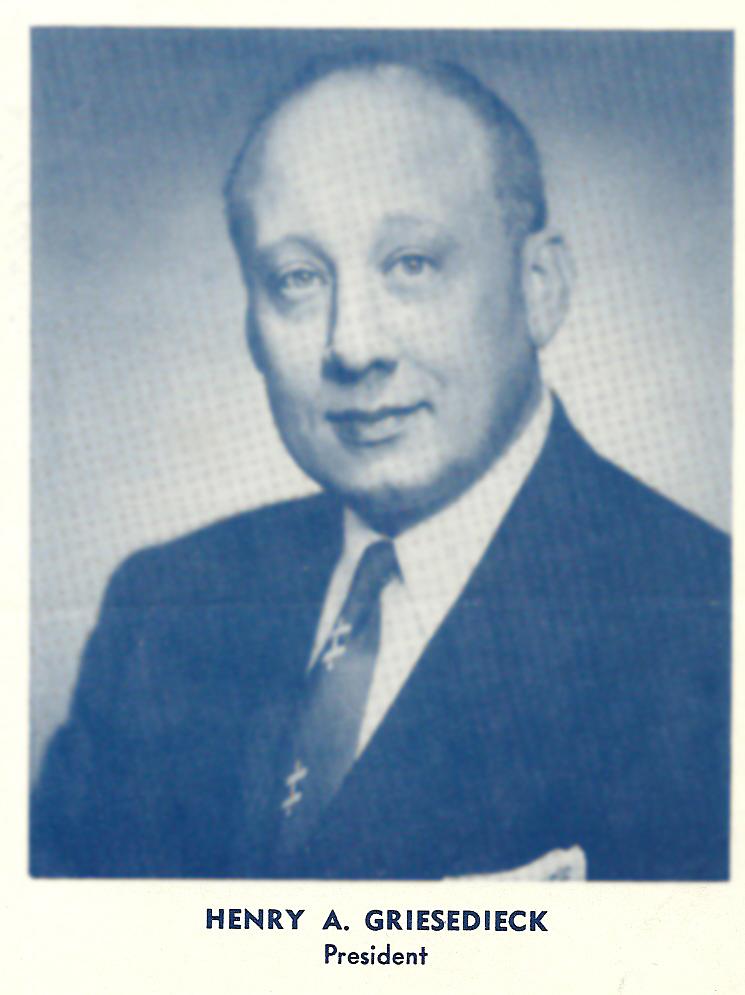 March 7 - The last living brother, Edward Griesedieck, passed away.  He was succeeded by his nephew Henry A. Griesedieck as President, and his son, Edward, Jr. as Executive Vice President.

During this time of transition, Anheuser-Busch hired away Griesedieck brewmaster Edward Vogel Jr. to produce Busch Bavarian.  This cheaper-selling brand cut heavily into sales of GB.

Although G/B was no more, the St. Louis brewing scene remained vibrant.  The Griesedieck family continued to operate the brewery at 1920 Shenandoah with the Falstaff Brewing Corporation.  In fact, the Number One sales position had passed from Griesedieck Brothers to Falstaff, followed by Busch, Bud, and Schlitz.

By the 1970s, though, Falstaff found itself in a costly anti-trust suit with the State of Rhode Island, and the Griesediecks ultimately sold their shares in Falstaff to brewing magnate, Paul Kalmanovitz.

The Griesedieck Brothers Brewery, which had been in continuous operation, one way or another, since 1850, ultimately closed its doors in 1977. 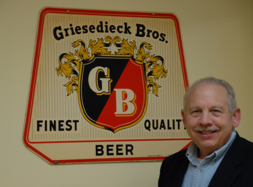 Raymond A. Griesedieck buys remaining shares from his cousins and becomes sole owner of the brewery. ​​​​​​​